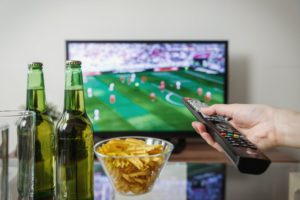 Each year on the first Sunday in February, a lot of us settle in to watch the Super Bowl. It’s not exactly the healthiest day! We eat a lot of nachos, pizza and other fatty goods. We’re likely to drink too much beer. And while the athletes on TV are getting plenty of exercise, spectators at home are most likely playing for Team Couch Potato.

Here’s a more recent bit of health information for sports fans that’s good to know during any big game. Experts say watching sports might even raise our risk of heart attack and other heart problems!

A report from the American Heart Association explained that watching a nail-biter game between rivals could cause emotional stress, which is one of the triggers of cardiovascular events. “You essentially get a fight-or-flight response,” explained University of Southern California professor Dr. Robert Kloner. “What happens? The sympathetic nervous system gets stimulated and there’s a release of catecholamines (hormones), like adrenaline. Heart rate and blood pressure go up. The contractility of the heart goes up.”

Experts weren’t totally convinced by some of the early studies, which had relied solely on the interpretation of statistics. So researchers from the University of Montreal devised a study to actually measure the heart rates of people who were watching a sports event. As they were in Canada, they chose hockey fans for their test subjects, and since it was University of Montreal, they chose a Canadiens game.

The results of the study, published in the December 2017 issue of the Canadian Journal of Cardiology, showed that fans who attended the game at the arena had a 110% increase in heart rate. Even those watching the match on TV experienced a heart rate increase of 75%.

One interesting finding: the researchers had theorized that the most heart-pounding moments would be at the end of a game, but that only turned out to be the case if the game went into overtime or was close. Other high-stakes moments, such as a scoring opportunity, were more likely to get the fans’ hearts going. (No, despite the reputation of hockey, fans didn’t experience as much effect during fights.)

None of the study authors suggested that fans give up their beloved sports events. But they suggest that heart patients discuss their sports stress level with their doctor. Awareness is key. Said the University of Montreal study authors, “At-risk patients should be warned about potential cardiovascular symptoms and should be instructed to seek medical attention promptly if symptoms develop.”

Sports fans can also make lifestyle changes that lower their overall risk, such as eating healthier snacks during those games, and going for a walk during halftime or afterwards. Aim for a balance between spectator sports and physical activity of your own!