Talking to the Senior Men in Your Life About COVID-19 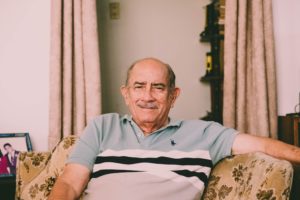 There is exciting news these days about the progress being made toward distribution of the vaccine targeting the virus that causes COVID-19, which has taken the lives of so many people worldwide. Older adults have been hardest hit by the virus, and it’s expected that they will be among the first on the list to receive the two-part vaccine.

If you will be talking with older relatives over the holidays, pay special attention to the men in your life. Women are often the family members who discuss and focus on health matters—and experts say that in the case of COVID-19, this might be one of the reasons that men have been harder hit by the virus.

Early on in the pandemic, it became apparent that men were at higher risk of serious illness than women. “The elderly and those with certain pre-existing conditions appear to be at greater risk,” said a research team from Capital Medical University in Beijing. “Men and women are equally likely to contract the virus, but men are significantly more likely to suffer severe effects of the disease and die. The results suggest that additional care may be required for older men or men with underlying conditions.”

These findings continue to hold true globally; in New York City, for example, men are dying at nearly twice the rate of women, and the gender disparity holds true for adult men of every age. Experts believe this is partially biological. Men and women have complicated gender-related differences in their immune systems, and men have a higher rate of risk factors such as heart disease and high blood pressure.

Behaviors also come into play. Men are more likely to smoke. They are less likely to conscientiously practice physical distancing and handwashing. Wearing a mask limits the amount of virus a person is exposed to, lowering the likeliness of a serious case—and men are less likely to wear a mask, or to wear it properly.

Gender-related attitudes also matter. A research team from Italy’s Bocconi University studied men and women in Australia, Austria, France, Germany, Italy, New Zealand, the U.K. and the U.S., and found that men are less likely to consider the pandemic to be a serious health problem and to take public health guidance seriously. They are also less likely to seek prompt medical assistance if they have symptoms.

Another study, this one from the University of Delaware (UD), suggests that the societal gender roles of men and women could be a factor. “Men and women are experiencing the pandemic differently,” reported UD political science professor Joanne Miller. “For example, men are more vulnerable to the virus, but women are more likely to be frontline workers and experience more of a burden as the primary caregivers at home.”

The study also showed that men who know people who have contracted the virus are more cautious. And so are those who are exposed to accurate information! We have an epidemic of misinformation right now that is undercutting public health efforts. The UD team points to conspiracy theories—rumors about everything from the virus being purposely created, to 5G cell towers causing it, to Bill Gates plotting to inject a microchip with the vaccine, to scientists exaggerating the seriousness of the pandemic for various nefarious political reasons. And as the vaccine is being rolled out, yet a new crop of falsehoods is spreading across the internet.

The UD team thought that the top factor behind the spread of misinformation would surely be political affiliation, but in fact, gender was even more of a factor. They found that women shared misinformation on social media, but men did it even more. The reason might be that many men, who are taught from a young age that they must be in control, are facing a situation where control seems impossible. “That leads to these beliefs that, well, maybe there’s a secret group of people controlling these things behind the scenes,” says Miller. “During a global pandemic, it’s kind of the perfect storm of uncertainty. And so when we feel a lack of control, uncertainty or powerlessness, we seek out explanations for why the event occurred that’s causing us to feel that way. And what this can do is it can lead us to connect dots that shouldn’t be connected because we’re trying to seek out answers. And sometimes those answers are conspiracy theories.”

Public health experts are advised to take gender differences into account in creating messaging. For example, men may feel more motivated to protect themselves and others if they view wearing a mask as patriotic, and as a way of fighting an enemy that threatens themselves, their families and the country. On a family level, we can urge the men we love to take precautions, to take care of their overall health, and to get the new vaccine when it’s available for them. During those holiday Zoom calls, give Dad a pep talk about being safe, and keep sharing emails containing science-based sources of information. These conversations aren’t always easy, but making the effort is a loving act.

« Will You Be Taking a Holiday Car Trip This Year?
Don’t Delay Reporting TMJ Symptoms »