Remodeling the “Food Pyramid” for Seniors 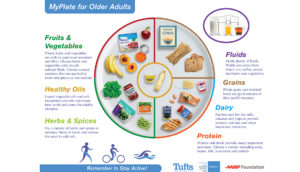 Many people assume the nutritional requirements of seniors are the same as those for younger adults. But a report released by the Jean Mayer USDA Human Nutrition Research Center on Aging (HNRCA) revealed that it’s not that simple. The researchers warned, “Nutrition recommendations are usually based on that of a typical healthy adult, and fail to consider the effect of aging on muscle mass, weight loss, and nutrient absorption and utilization.”

For 30 years, the HNRCA, located at Tufts University in Boston, has been at the forefront of senior nutrition research. You might have seen the colorful graphics they developed. In 2002, they modified the familiar “food pyramid” to create a version for seniors, and updated it in 2007. In 2011, the pyramid transformed into MyPlate for Older Adults. You can see the evolution of the plate here—and in 2016, MyPlate received an update to its current form.

HNRCA predicted that by the year 2050, the population of people older than 80 will triple—and many of these seniors are vulnerable to nutritional frailty, which they define as “a state commonly seen in older adults, characterized by sudden significant weight loss and loss of muscle mass and strength, or an essential loss of physiologic reserves, making the person susceptible to disability.” Even obese older adults can have nutritional deficiencies that raise their risk of memory loss, weakness and a weakened immune system.

In brief, the MyPlate for Older Adults is composed of:

The guidance also emphasizes selecting healthy fats and fluids, substituting herbs and spices for salt, and choosing nutrient-dense food. And exercise is given a place at the table as well, as an essential part of senior wellness.

The team emphasized that even if seniors are aware of the best foods to choose, social factors also enter in. Can a senior afford good food? Can they get to the grocery store? Prepare meals? Eat without assistance? Are they feeling loneliness or depression—both of which suppress the appetite?

The Tufts team wants to turn these new findings into improved education, not only for elder care professionals, but also for family caregivers. Said senior scientist Alice H. Lichtenstein, D. Sc., “It is never too late to make smart changes in your diet. Shifting towards healthier food choices can improve symptoms or decrease risk for developing chronic diseases such as type 2 diabetes, hypertension and heart disease—all of which are more common in older than younger adults.”

Lichtenstein also suggested that seniors begin with small changes in their food and beverage choices, and then continue to build on those changes. “If someone plans on making major changes in their diet they are advised to talk with their primary healthcare provider,” she advised.

« Are Your Devices Making You Lazy?
Coronavirus Control: How’s Your Handwashing Technique? »