Coronavirus Calls Attention to an Epidemic of Ageism 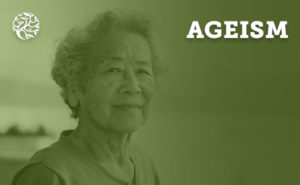 During May, we have been celebrating Older Americans Month. The theme for 2020 is “Make Your Mark,” encouraging us to recognize the many contributions seniors make to their families, their communities and to the nation.

As it happens, 2020 is an especially good time to focus on older Americans, because this year as the coronavirus pandemic has grown, there has been increased attention to the way older adults are portrayed and treated in this country and around the world. Ageism has come to the forefront.

Early in the outbreak, we heard speculation that the virus would be fatal “only in older people.” The ugly hashtag “boomer remover” appeared. Pundits and even some officials implied or stated outright that saving the lives of seniors is less important than protecting the economy, and urged older adults to “sacrifice themselves” for a speedy reopening. Senior living communities have struggled to access protective equipment and other resources.

Statement from the United Nations

In light of this, United Nations Secretary-General António Guterres released a statement in May calling for respect for the rights and dignity of older people during the pandemic. “No person, young or old, is expendable. Older people have the same rights to life and health as everyone else,” said Guterres. “Let’s not treat older people as invisible or powerless.” Guterres also called for addressing the technological “digital divide,” more important than ever during social distancing to help older adults stay connected.

Statement from the American Geriatrics Society

The American Geriatrics Society (AGS) also published a position statement in May calling for fairness in allocating resources at this time. The statement says: “COVID-19 continues to impact older adults disproportionately when it comes to serious consequences, from severe illness and hospitalization to increased risk for death. Concerns about potential shortages of ventilators, hospital beds, and other supplies to address these shortages have focused attention on decision-making about who gets access to these resources.”

Said statement author Timothy W. Farrell, MD, AGSF, “A just society strives to treat all people equally, so there’s something particularly unjust about characteristics beyond our control—like age—determining whether we receive care.” Farrell added, “The AGS believes we must focus on the most relevant clinical factors for each person and case when considering how to distribute resources fairly without placing arbitrary weight on age.”

Ageism has an impact on seniors in many ways. And it also affects younger people, who are less likely to age well if they have a negative attitude about older adults. So it’s encouraging that two Columbia University Mailman School of Public Health graduate students recently called attention to the different ways ageism has manifested itself during this crisis. Study authors Yasmin Amini and Nicole Levy say this ageism takes three forms:

During these days when the wellbeing of older adults is more under the eye of many, it’s important to not only protect but also lift up older people.

« Having Food Delivered During the Pandemic? Play It Safe.
4 Ways to Avoid the “Side Effects” of Quarantine »