Get On Up! Avoiding the Harm of an Inactive Lifestyle 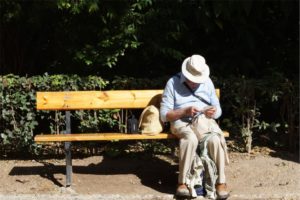 Researchers from University of Copenhagen wanted to learn more about the effects of inactivity. In a recent study, they had a group of men wear a leg pad that caused them to be highly inactive for two weeks.

The startling results: After only two weeks, young test subjects lost a third of their muscle strength, leaving them, as the researchers reported, “on a par with a person who is 40 to 50 years their senior.” Older test subjects lost less muscle mass, but they could ill afford to lose it! Said researcher Martin Gram, “Even though older people lose less muscle mass and their level of fitness is reduced slightly less than in young people, the loss of muscle mass is presumably more critical for older people, because it is likely to have a greater impact on their general health and quality of life.”

We know that immobility due to a stroke or hip fracture can have a very bad impact on overall health. Today, “complete bed rest” is seldom prescribed for most people who are hospitalized. But for many of us, our lifestyle might be called “couch rest” or “desk rest.” We sit at a desk all day, and then plop down in front of the TV or gaming console for most of the evening. Bad idea!

Here are just a few of the recent studies warning of the damage caused when we sit down for most of our waking hours. Leading a largely sedentary lifestyle:

Raises the rate of many diseases. Kansas State University researchers found that people who sit most of the day have a higher rate of diabetes, cancer, heart disease, stroke and other serious conditions. A number of studies also show that the more TV we watch, the greater our risk of diabetes and heart disease—and that’s because we sit while we’re watching.

Impairs blood flow. University of Indiana researchers say sitting affects our arteries, cutting down blood flow by half after just one hour of sitting. And the American Heart Association warns that binge watching your favorite TV shows could raise the risk of blood clots.

Increases disability. Northwestern University School of Medicine researchers found that for seniors, every additional hour per day spent seated raises the risk of disability, causing limitations in performing basic activities such as eating, dressing, walking across the room and getting in and out of bed.

Leads to back pain. Our bodies aren’t designed for chairs, say many experts. Sitting in a chair is about the same as lying in bed—and we certainly wouldn’t stay in bed all day. Beyond the inactivity, the sitting posture is hard for our spines.

Shortens life. Research published in the British Medical Journal showed that sitting for more than three hours each day lowers our life expectancy by two years. And scientists from Harvard, Cornell and a number of other research centers also found that people who spend more time sitting down during the day don’t live as long.

What can we do to lessen the damage from prolonged sitting?

Researchers aren’t quite in accord about whether we can sit at a desk all day and then make up for it with an hour on the treadmill. Some studies are encouraging. A recent study from the University of Leicester in the UK reported that people who sit down a lot of the time but also get some exercise have a lower rate of heart disease and diabetes than those who are sedentary all day. Said researcher Kishan Bakrania, “This research is significant because it demonstrates yet again why physical activity and exercise is so important. It shows that people who spend large amounts of time not moving either through work, leisure or lifestyle can counteract some of the negative effects of sedentary behavior by regularly exercising.”

On the other hand, the Cornell research team found that people who spend more time sitting during the day have a shorter life expectancy even if they get some exercise during their off hours. In other words, even if we work out in the evening, the effects of nonstop sitting during the day persist. Many experts say the solution is to break up our day with small bouts of exercise. The University of Indiana researchers found that breaking up an hour of sitting with walking for five minutes reversed the negative effect on the arteries. University of Utah School of Medicine professor Srinivasan Beddhu reports that even taking a two-minute walk once an hour can have good results, though he reminds us that for best health, we also need around 150 minutes of regular exercise per week in addition to those hourly short strolls.

Oregon State University researchers also report that small amounts of activity make a big difference. Professor Brad Cardinal recommends enough one- or two-minute increments to add up to 30 minutes during the day. Says Cardinal, “We are designed by nature as beings who are supposed to move. In our society, you will always be presented with things that entice you to sit or be less active because of technology, like using a leaf blower instead of a rake.” His co-author Paul Loprinzi advises, “Seek out opportunities to be active when the choice is available. For example, rather than sitting while talking on the phone, use this opportunity to get in some activity by pacing around.”

Exercise need not be formal or even planned. Meeting a friend for coffee? Suggest a brisk walk instead. Park at the far end of the parking lot from your destination. If you’re physically able, take the stairs instead of the elevator. Stand up from your desk and stretch several times an hour to be kind to your back. Keep some weights by the couch and use them while watching TV. For a little extra motivation, invest in a pedometer to see how you’re doing.

One last thought: Recent research from the University of Leeds in the UK found that people who describe themselves as “fidgety” seem to gain health benefits from their small, frequent movements. So if Mom told you to “stop squirming” when you were a kid, this might be a time when Mother did not know best.

« “Mom, You Forgot to Pay the Gas Bill…”
September 18 is National HIV/AIDS and Aging Awareness Day »