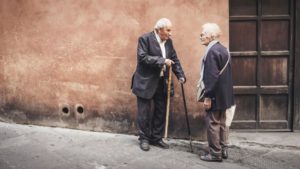 November is National Epilepsy Awareness Month. Each year, the National Epilepsy Foundation (www.epilepsy.com) sponsors this recognition date to call attention to this brain disorder, which causes an interruption in normal function resulting in seizures. There are many types of seizures. In some types, a person might fall to the ground and experience stiffened muscles, jerks and spasms. In other cases, the person might lose consciousness, seem confused, or appear to be staring into space.

More than three million people in America are living with epilepsy, and according to the Centers for Disease Control and Prevention (CDC), around 500,000 of them are older than 65. Some of these seniors have lived with the condition for a long time, while others might have developed it in their later years, perhaps as the result of a stroke, infection, head injury, brain tumor, or a type of dementia, such as Alzheimer’s disease. Sometimes, the cause is unknown. Diagnosis may be more complicated in older adults because some of the symptoms of epilepsy, including confusion and memory loss, may be mistaken for confusion, delirium, dementia, or “just growing older.”

But it’s very important that seniors be diagnosed. Epilepsy can be managed, but left untreated, it can lead to a serious injury, brain damage, and even death.

People with epilepsy should talk to their doctor about whether it is safe to drive, swim or take part in other activities that might be unsafe. And the emotional toll of living with epilepsy should not be overlooked. The Epilepsy Foundation says, “Public perception and treatment of people with epilepsy are often bigger problems than actual seizures.” Support groups and organizations help empower patients to overcome the stigma about epilepsy, which has arisen from ignorance and fear.

The Epilepsy Foundation notes that relatively few studies on epilepsy in senior patients have been performed, and they call for further research. They say that whether it is the continuing care of a person with epilepsy who is entering their senior years, or a senior who is newly diagnosed, the goal is “no seizures and no side effects.”

According to the CDC, treatment is more complicated in older adults. Our bodies process medications differently as we age, putting seniors who are taking anti-epilepsy drugs at higher risk of side effects such as drowsiness, dizziness and fatigue than when they were younger. The drugs seniors might be taking for other conditions also could interact with their anti-epilepsy medications as well.

If you have an older loved one with a seizure disorder, learn what to do—and not to do—to keep your loved one safe until a seizure stops, and when it is best to call 911. To learn more, check out tips from the CDC and the Epilepsy Foundation.

Source: IlluminAge AgeWise with materials from the Epilepsy Foundation and the Centers for Disease Control and Prevention (CDC).