Top Five Reasons Seniors Should Get a Flu Shot 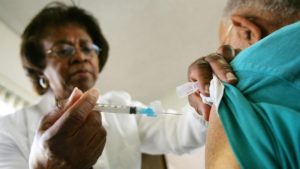 Every year around this time, the Centers for Disease Control and Prevention (CDC) sends out a renewed call for most Americans to be immunized against the seasonal flu. Even though the general recommendation is to get your Flu shot as soon as it’s available, usually during October, the CDC holds this event to remind us that December isn’t too late—the peak flu season is just beginning. Even people who’ve already had the flu can benefit from the shot, because it protects against three or four different strains of the flu. Who would want the flu twice in a year?

Some seniors think shots are just for kids. They couldn’t be more wrong! Here are five reasons to get the flu shot right now.

The flu is a serious illness. We sometimes talk about it as if it’s just a minor inconvenience, but at the very least, the fever, cough and body aches can make for a miserable week or so. And there are serious complications from the flu—complications that are far more common in seniors. These include sinus and ear infections, pneumonia, inflammation of the heart, brain or muscles, organ failure and sepsis. Flu worsens some chronic health conditions, and each year it leads to an average of 200,000 hospitalizations and thousands of deaths. The flu shuts down businesses and even schools as it makes its way through a community.

The flu can ruin your holidays. During the holidays, most of us spend more time than usual in social gatherings, just at the time when the flu is really starting to spread. People travel in from all over the country and all over the world. From spending hours on a crowded plane, to shopping at the mall, to enjoying holiday buffets, the holiday season is a time flu germs travel. Get your shot now to be prepared when the holidays come around; it takes about two weeks for full immunity to kick in. For other food holiday tips, read this blog.

There’s a better flu shot for seniors now. The flu vaccine is available as a nasal spray, but the CDC doesn’t recommend it this year—and never for older adults. Get the injection instead. And your doctor or pharmacist will probably suggest a higher-dose version of the vaccine, recommended for everyone older than 65. The CDC also reports that this year’s shot may be a better match to the strains that are expected, and should be more effective for seniors. And don’t forget that unlike other immunizations, you need a flu shot every year. This is because there are many flu viruses, and they are constantly changing.

If you get the shot, but you still get the flu, you’ll likely have a milder case. The flu shot doesn’t prevent all cases of the flu. Some years, it’s more effective than others. But research shows that even if you’re among the unlucky minority of people who are immunized but come down with the flu anyway, you’ll likely experience milder symptoms and fewer complications than if you weren’t vaccinated.

It’s not just for you! When you get a flu shot, you aren’t only protecting yourself. You’re also making it less likely that people who cannot be vaccinated will be exposed. This includes babies under six months and people with a compromised immune system. And here’s some news to spread: According to the Infectious Diseases Society of America, the higher the overall vaccination rate of a community, the less likely seniors are to get the flu. The vaccination doesn’t prevent all cases, and seniors have weaker immune systems—so, said Glen B. Taksler, Ph.D., of the Cleveland Clinic, “Our findings suggest that flu vaccinations should be encouraged among low-risk adults not just for their own benefit, but also for the benefit of higher risk adults in their community, such as the elderly.”