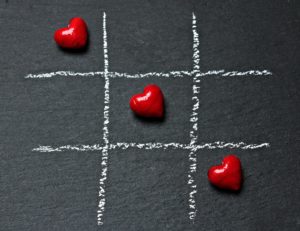 During February, we celebrate Valentine’s Day. Gerontologists report that during the pandemic, older couples have been providing a great deal of support for each other’s well-being. At any time, the health of couples can be closely intertwined. For example, the American Heart Association reports that couples often share certain heart-health traits, such as blood pressure, cholesterol and blood sugar levels.

A November 2021 study from the University of Illinois even found that—for better or for worse—the heartbeats of couples tend to synchronize! Researchers instructed older couples to wear a Fitbit when at home to measure their heart rate, and also a small proximity-sensing device that showed how physically close partners were to each other. “When partners are close to each other, their heart rates synchronize in complex patterns of interaction,” said Prof. Brian Ogolosky. “But just being close to another person isn’t always beneficial; it depends on the nature of the interaction. Closeness in the context of a conflict is very different from closeness in the context of a loving interaction. Similarly, changes in heart rate can be positive or negative.”

Heart health is far from the only health condition that can be affected in tandem. Spouses or committed cohabiting partners influence each other’s health and health behaviors in a number of documented ways:

Nutrition. Most people eat less well when they eat alone. It’s harder to get small amounts of ingredients to cook for one. And there’s more incentive to prepare a nutritious, fresh-cooked meal when our partner will be enjoying it with us. On the other hand, if one partner loves junk food and makes other unhealthy food choices, the other one might follow suit.

Exercise. It’s easy to let our exercise program fall by the wayside when we’re busy, or we just don’t feel like putting on our walking shoes. Our spouse can give us a nudge. Many couples enjoy exercising together. Rather than sit on the couch while they download about each other’s day, they might go for a walk, or do other exercises together.

Body weight. Maybe you’ve heard someone say, “I went on a diet, but it was my spouse that lost weight!” University of Connecticut experts note, “When one member of a couple commits to losing weight, the chances were good the other partner would lose some weight too, even if they were not actively participating in a weight loss intervention.” They say this ripple effect has to do with lifestyle changes, and also the benefits of the “buddy system.”

Health reminders. Past research showed that married women were more likely to make doctor appointments, follow the doctor’s advice, and urge their spouses to do so. But more recent studies show that men are doing their own share of nagging (the good kind) these days! Spouses accompany each other to appointments and provide care support. They check in with each other about symptoms, and often are the first to notice something is wrong.

Emotional well being. Spouses can support each other. They can listen to each other’s fears, concerns, and all those day-to-day challenges—which is a very effective way to lessen harmful stress. On the other hand, says University of Illinois’ Olgosky, while long-term marriages have a profound impact on health and well-being, the benefits depend on relationship quality. Being in a marriage marked with conflict is very stressful! It’s never too late for couples counseling.

Sleep quality. Sleep experts remind us that treating sleep problems benefits a person’s sleep partner, too. If one partner snores, has sleep apnea or another sleep disorder, or gets up frequently at night to go to the bathroom, this can leave their spouse wakeful. And maybe you’ve heard the adage: “Don’t go to bed angry.” It works the other way, as well. Studies show that couples whose sleep is interrupted by each other tend to be irritable with each other and less able to settle their day-to-day differences.

Bad habits. Studies show that if one partner smokes or drinks too much alcohol, this raises the chance that the other will, as well. But partners can support each other in breaking those habits. Spouses also remind each other to wear their seatbelt and follow other safety measures.

Mental stimulation. Giving our minds a good workout is as important as physical exercise when it comes to brain health. A recent study from Michigan State University showed that married people have a somewhat lower risk of dementia. “Daily communication with a spouse provides cognitive stimulation and may increase neural plasticity, thereby maintaining and improving cognitive reserves,” the study authors reported.

Socialization. Loneliness is a serious risk factor for poor health, and a robust social network is beneficial. “Being married is related to increased access to social engagement, social support, and social integration—all factors inked to better health and well-being,” the Michigan State researchers noted. “Spouses broaden [each other’s] networks by connecting them with, for example, the spouse’s friends and family.”

It’s important to know that other close relationships—with family members, friends and neighbors—also can benefit our health, and be part of a support system for promoting healthy behaviors.