Improving Couples Communication When One Partner Has Dementia 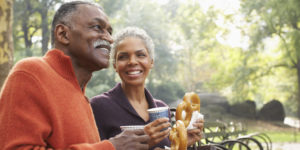 In time for Valentine’s Day, here’s an update on some important research.

Today more than 35 million people are living with Alzheimer’s disease or a related condition. Many live at home, while others live in a memory care community or other supported living environment. No matter where a person with Alzheimer’s lives, they likely receive a great deal of care and support from family members—and, say experts, the primary caregiver is most often their spouse or romantic partner.

Spouses do so much to support their loved one’s well-being. They serve as a liaison with healthcare professionals, letting them know more about their spouse. They are often the first to spot and report changes in their spouse’s condition. They coordinate their loved one’s care. They provide transportation, hands-on assistance with medical tasks, bathing, grooming and healthy eating. Above all, they continue to be intimately connected and concerned about their beloved’s well-being.

These can all be challenging tasks—but when asked about what is hardest about their role, most spouses report that the loss of their old communication patterns is the most difficult. We are such a social species, and verbal communication plays a dominant role in the success of a marriage and the cementing of a relationship. Without thinking about it, over time, spouses develop their own language of verbal and nonverbal communication. They know each other’s hot buttons, verbal shortcuts, and the words that work.

What happens when Alzheimer’s disease or other dementia blunts one spouse’s speech ability and alters their emotional palette? Spouses with dementia may become increasingly frustrated as they struggle for words. They may misinterpret what the caregiver spouse is saying. They may be disoriented and say things that aren’t true. They may swear or shout or make accusations. Eventually, communication may break down almost entirely as one or both spouses withdraws. Emotional connection suffers in the silence.

Yet this pattern is not inevitable. Couples often manage to sustain a connection even as the disease progresses. In 2015, researchers from Florida Atlantic University studied the communication of couples in which one spouse had dementia. They found that even as spouses are no longer able to connect in the same old way, new patterns may evolve.

Head researcher Prof. Christine L. Williams noted that studies on the subject usually focus on the breakdown of communication and the deficits the couples suffer. But in fact, noted Williams, couples often find ways to adapt. Her team studied a group of couples and found that many had developed a “new normal” – techniques and a new language that sustained intimacy.

Then, during 2017, Williams and her team conducted a new study that offered more good news: When it comes to spousal communication between a person with dementia and their caregiving spouse, “practice makes perfect.” The team found that caregivers could be taught to communicate in a clear, respectful and effective way – and that the spouse with dementia also could improve.

The team offered training to the caregiver spouses, who were advised, for example, to avoid testing their loved one’s memory or arguing, instead staying in the moment or talking about the past in a way that led to a successful interaction. They were taught to converse patiently even if their partner responded but little.

And as with every communication duo, it takes two, so the spouses with dementia also were given instruction, via an opportunity to practice their conversation skills with a professional trained in the communication disorders associated with dementia.

At the end of the training, the research the team recorded and analyzed interactions between the spouses. Williams was pleased to note that the training worked. “Using this new tool, I was able to confirm that the intervention I used actually worked and that communication improved in both the spouse caregiver and the patient over time,” she said. “I was ecstatic because I originally thought that maybe the caregivers’ communication would improve and that would be great. However, to have positive changes in a person who is continuing to decline over 10 weeks, which is a long time, was something I really did not expect. This intervention worked for both the caregiver and the patient.”

Said Williams, “As patients progress with dementia, couples don’t have to lose everything especially if they are engaged, if they can still relate to one another, and if they focus on the here and now.”