Make a Holiday Food Safety List and Check It Twice 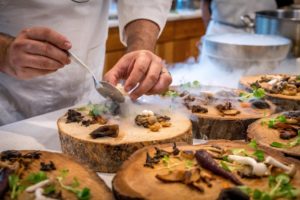 Days before Thanksgiving this year, government agencies warned of an outbreak of Salmonella bacteria in turkey products. And were you one of the many cooks who ended up throwing away the romaine lettuce that was earmarked for the salad after the E. coli scare?

These two warnings right in a row might make us alert to food safety practices during holiday gatherings this year. It’s prime time for foodborne illness outbreaks, so check out these three last-minute reminders:

Many cooks are unaware of how easy it is to spread bacteria. And studies show amateur chefs aren’t getting very good advice from the experts! A University of Massachusetts study found that few cooking shows on TV or YouTube include food safety precautions such as handwashing and using a food thermometer. Another recent study, this one from North Carolina State University, found that even well-regarded cookbooks may offer bad advice! The researchers evaluated 1,497 recipes from 29 cookbooks that had appeared on the New York Times bestseller list. All the recipes included raw meat, poultry, seafood or eggs.

The researchers found that in particular, the cookbooks gave unsafe advice on how to tell when these foods are “done.” Using a food thermometer is the only safe way to know—but the cookbook writers instruct us to gauge “doneness” by the color and texture of meat or juices, and most commonly, by cooking time. Study author Katrina Levine warned, “Cooking time is particularly unreliable, because so many factors can affect how long it takes to cook something: the size of the dish being cooked, how cold it was before going into the oven, differences in cooking equipment, and so on.”

Levine reports that some of the cookbooks even advise cooks to “cook until done.” Not helpful! So, if you got a wonderful new cookbook as a holiday gift last year, this year ask Santa for a top-shelf food thermometer. Open that gift before the holiday turkey is done. If you’re cooking a whole turkey, check the internal temperature of the thigh, wing, thickest part of breast and the center of the stuffing. The temperature should be at least 165°. The U.S. Department of Agriculture (USDA) says it’s best to cook the stuffing separately in a casserole dish—but if you do stuff the bird, test stuffing temperature as well, to 165°.

Maybe you are food safety savvy already. Good for you! Be sure to follow the basics even if guests are helping out in the kitchen. Remind then to wash their hands before, during and after preparing food. Wash utensils, cutting boards and countertops with hot, soapy water. Rinse produce under running water.

The USDA offers this advice for preparing turkey or other poultry:

It’s so easy to lose track of time during the festivities. There are presents to open, family members to greet and catch up with, holiday toasts, and those phone calls from absent relatives who want to wish us holiday greetings. The meal itself can be a leisurely affair. Before we know it, the turkey and other foods have been sitting on the counter too long … and bacteria can grow. Refrigerate leftovers within two hours. Don’t let foods spend much time in the temperature danger zone—between 40° and 140° F. Cut leftover turkey off the bone and store stuffing separately.