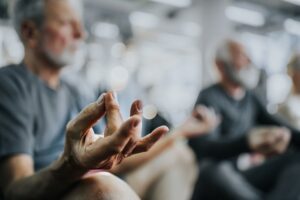 What do the Beatles, Oprah, and Stephen Curry all have in common? Meditation. All found meditation beneficial and helped make it mainstream. Today, meditation is popular, with over 14% of Americans practicing some type of meditation. In 2017, more than 5% of children aged 4 to 17 years were participating in mediation, with some schools offering it as part of the curriculum. More than 2,500 meditation apps have launched since 2015.

But just because celebrities like it, schools use it, and apps offer it, does not mean science supports it. So, what does science say about meditation’s health benefits?

Meditation goes back thousands of years and is a broad term that includes a variety of practices which calm the mind and help with overall wellness. Some types include a specific focus, like breathing, visual images, word, sound, or phrase. Other practices center mindfulness, a phrase that describes paying attention to the present moment without making any judgments. Both forms can be combined with other activities, like therapy, to help apply insight from meditation to on-going experiences.

While meditation can be easily adopted by people of many ages and abilities and can be low-cost, research is still understanding its short- and long-term benefits. It is too soon to state definitively the outcomes. And there are documented risks to meditating; a 2020 review found 8% of meditation research participants had a negative effect such as anxiety or depression, which is similar to the rate that those symptoms are reported for psychological therapies.

New research on meditation and mindfulness is being published almost daily. While the scientific claims may change, one thing always remains constant: it doesn’t hurt to slow down occasionally.

« Understanding Lewy Body Dementia
The Gift of Getting Older »