Why Many Avoid the Conversation About Alzheimer’s Disease 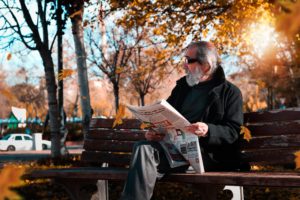 University of Michigan experts recently released a study titled “Thinking About Brain Health,” in which they polled people in their 50s and early 60s about their thoughts about dementia and Alzheimer’s Disease.

They found that people worry about memory loss a lot. Almost 50% of the people polled believed that they themselves were likely to develop serious memory and cognitive loss as they age, due to Alzheimer’s disease, vascular dementia or other conditions—but in reality, only 20% of older adults will deal with these conditions.

And yet, despite their fears, only 5% of the people polled had talked to their doctor about brain health. (Among participants who had a loved one with dementia, that number was higher—but only slightly, at 10%.)

The people polled said that they did certain things to try and protect their brain health—working crossword puzzles or taking supplements—but those aren’t the really powerful brain protectors! “While many people in this age range expressed concerns about losing memory, and say they take active steps to prevent it, most haven’t sought advice from medical professionals who could help them understand which steps actually have scientific evidence behind them,” says Dr. Donovan Maust, a geriatric psychiatrist who helped design the poll and analyze the results.

For example, the researchers said, many people may not realize the brain-protecting qualities of managing their blood pressure and blood sugar, getting more exercise, improving sleep quality, quitting smoking, and spending more time socializing with others.

Will your doctor tell you?

Patients aren’t the only ones who avoid the conversation about dementia! Other studies show doctors may not readily raise the topic of memory loss. In 2018, the Alzheimer’s Association noted that a full 93% of seniors believe their doctor will bring up the subject of memory loss and suggest a screening—when in fact, fewer than half of doctors routinely do that.

An earlier study from the Association even found that when doctors diagnose a patient with Alzheimer’s, fewer than half of them tell the patient—or for that matter, family caregivers. What is the reason for this reticence? The Association speculates that there is still a taboo about discussing dementia. Perhaps doctors think they are sparing patients and families bad news.

But this means that patients and families can drift along in a sort of diagnostic limbo, with families thinking their loved one is just experiencing the normal changes of aging. Family increasingly end up making accommodations and excuses for their loved one’s changing abilities and personality.

The Association is trying to change this attitude. For example, they have enlisted the help of people who themselves are in the early stages of Alzheimer’s to be part of the Alzheimer’s Association’s Early-Stage Advisory Group. “Denial and rationalization are common responses to the early signs and symptoms of Alzheimer’s—it was a part of my experience,” said group member Darrell Foss. “Too often, people experiencing symptoms, or family members seeing them, wait to speak up, even when they know something is wrong. It can be scary, but that is why I’m sharing my personal experience—to illustrate why talking about Alzheimer’s concerns early is so important.”

The advantages of early diagnosis

Addressing concerns about memory loss early is vital. For one thing, the problem might not even be Alzheimer’s. A person could have a different form of dementia, for which the treatment would be different. It’s even possible that the cause of a person’s memory loss and confusion is treatable—perhaps the side effects of medications, depression, thyroid disease, vitamin deficiencies, dehydration, or even due to infection, often of the urinary tract.

If the diagnosis is dementia, early diagnosis clarifies things, explaining behavior changes and helping the senior and family understand what has been going on. It allows for the best possible treatment; while Alzheimer’s can not be cured, the progression of the disease may be slowed by lifestyle changes. And an open diagnosis gives the patient and family time to plan for the future while the person with dementia can still participate. It gives them the time to carefully choose the best possible care options for the time when it’s needed.

Today, people with dementia can experience good quality of life. An appropriate living situation and activities can provide a meaningful life. Being in denial about the diagnosis could keep the person from accessing those resources.

Source: IlluminAge AgeWise with information from the Alzheimer’s Association and the University of Michigan. You can read the entire “Thinking About Brain Health” study here

« At Every Age, We Want to Make a Difference
Want to Feel Better About Yourself? Try Feeling Better About Others. »