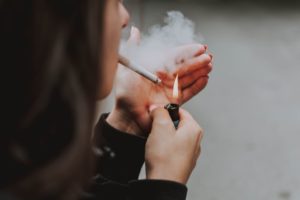 Lung cancer is the leading cause of cancer death in both men and women in the United States. Every year in this country, about 218,000 cases are diagnosed, and about 150,000 people die of lung cancer.

What are the symptoms?

Can lung cancer be treated?

Yes. Lung cancer is treated in several ways, depending on the type of lung cancer and how far it has spread. Treatment may include surgery, chemotherapy, radiation therapy, or targeted therapy that uses drugs to block the growth and spread of cancer cells.

Who should be screened?

For people who are ages 55 to 80 and are heavy smokers (for example, one pack per day for 30 years), or for people in that age range who were heavy smokers but have quit within the last 15 years, the U.S. Preventive Services Task Force recommends getting screened every year with a low-dose computed tomography (CT) scan. Screening can catch lung cancer when the tumor is still small or has not spread, offering more options for treatment.

Lung cancer screening is not without risks, says the CDC. If a suspected cancer is found, that can lead to invasive tests like biopsies, which can cause infections, bleeding, and collapsed lungs. People who are considering being screened for lung cancer should make a decision together with their doctors or nurses. Fortunately, resources are available for patients and their health care providers that help them have an informed discussion and decide together.

The No. 1 way to reduce your risk

Certain things raise the risk of lung cancer. They include exposure to radon, a naturally occurring gas that can be found in houses and buildings. Other substances, such as asbestos and diesel exhaust, also raise the risk. A personal or family history of the disease is a risk factor.

But by far, the best way to reduce your risk of getting lung cancer is to never start smoking. In the United States, smoking is linked to about 80% to 90% of all lung cancers. People who smoke cigarettes are 15 to 30 times more likely to get lung cancer or die of lung cancer than people who don’t smoke. The longer a person smokes and the more cigarettes smoked each day, the more the risk goes up.

The CDC offers free quit smoking resources. Visit the smokefree.gov website, call 1-800-QUIT-NOW (784-8669) or text “QUIT” to 47848. Smoking is an addiction to tobacco products, but even if it takes more than one try, it’s totally worth it. It’s never too late to quit! The risk goes down after quitting. Even after people are diagnosed with cancer, quitting can help treatments work better, reduce the risk of the cancer returning, and improve the health and quality of life of former smokers.

And remember—smoke from other people’s cigarettes, pipes or cigars—“secondhand smoke”—also causes lung cancer. So when you quit, you also reduce the risk for family, friends and everyone else.

Source: The Centers for Disease Control and Prevention (CDC), adapted by IlluminAge AgeWise

« Give Your Thanksgiving Plate a Healthy Makeover
What Are the Complications of Seasonal Flu, and Who’s at Higher Risk? »