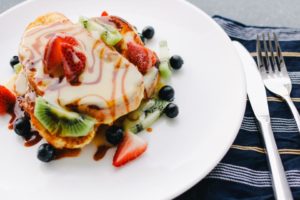 Do you like to watch cooking shows? A recent study published in the Journal of Nutrition Education and Behavior suggests that the popularity of these programs might be one of the reasons that fewer Americans are taking precautions to avoid foodborne illness.

According to researchers from the University of Massachusetts Amherst, during the past decade, fewer consumers reported that they practice food safety steps, such as washing their hands before handling food or keeping food at a safe temperature. To see if cooking shows set a bad example, the researchers watched several episodes of 10 popular shows and rated them on safe food handling practices.

Reported study author Nancy Cohen, PhD, RD, LDN, FAND, “The majority of practices rated were out of compliance or conformance with recommendations in at least 70 percent of episodes and food safety practices were mentioned in only three episodes.” Cohen added, “For most behaviors observed, the percentage of shows in conformance with recommended practices was much lower than that seen in restaurant employees and consumers in general.”

Cohen suggests that cooking shows could step up their game in this department. She says, “There are many opportunities on cooking shows to educate the public regarding safe food handling practices and help reduce the incidence of foodborne illness. Similarly, nutrition and food safety educators could work with the media to produce shows that demonstrate positive food safety behaviors and educate consumers about food safety practices as they adopt recipes.”

The Centers for Disease Control and Prevention (CDC) tells us that each year, one in six Americans—that’s 48 million of us—will get sick, be hospitalized and even die when harmful microorganisms—mostly bacteria, but sometimes viruses, parasites, molds or toxins—get into our bodies by means of the food or liquids we consume.

Being informed about food safety is the first step to protecting yourself and your loved ones. When it comes to foodborne illness, what you don’t know can hurt you! Read on to find out how much you know about foodborne illness … including the special concerns of older adults.

Myth #1: Only small children are at risk for severe cases of foodborne illness.

Fact: For most people, the symptoms of food poisoning, while definitely unpleasant, are short-term and not life-threatening. But certain populations are at higher risk of hospitalization, permanent health problems, and even death. This includes children, people with HIV/AIDS, and people older than 65. As we grow older, we are at greater risk because of …

Myth #2: Stomachache, vomiting, diarrhea and fever are usually caused by “the flu.”

Fact: Influenza (“the flu”) is a respiratory ailment, including sore throat, body aches, and sometimes a runny nose. Some people erroneously use the term “stomach flu” when they mean gastrointestinal (digestive) illness: nausea, vomiting, abdominal cramping and diarrhea. The germs that cause gastrointestinal illness most often enter the body through contaminated food or water.

Fact: Sometimes, food poisoning symptoms are obvious within 20 minutes. But in many more cases, it takes days or even weeks for symptoms to appear. The effects of foodborne illness most often last for a day or two, but can persist for over a week.

Myth #4:  Only meat and dairy products can harbor harmful bacteria.

Fact: Undercooked or raw meat, poultry, seafood and eggs are indeed the most common culprits in food poisoning, because they provide the best environment in which harmful germs can flourish. But other foods can also harbor bacteria that can make you sick. These include fresh fruits and vegetables, sprouts, and unpasteurized juice. When purchasing and preparing food, take these sensible precautions:

Myth #5:  So long as you cook meat, poultry and seafood to the recommended temperature, you won’t come into contact with harmful bacteria.

Fact: Proper cooking is important. But one big culprit in food poisoning is cross-contamination, when the juices from uncooked meat come into contact with other foods. It can begin right at the grocery store, if fresh produce and raw meat juices touch in the shopping cart. And give your food preparation practices a checkup. What about that cutting board? When you were done working on the raw chicken, did you then use the same surface to prepare a fresh salad? And if you were cooking on the grill, did you place the cooked steak onto a clean plate instead of the same one on which you carried the raw meat?

Myth #6: Let hot foods cool down thoroughly before putting them away, so you don’t damage your refrigerator.

Fact: The claim that hot food can damage your refrigerator is an old story left over from “icebox” days. Improper food storage is a major factor in the growth of harmful bacteria—and every minute cooked food is left at room temperature allows more bacteria to grow. So it’s important to refrigerate or freeze leftovers as soon as possible. The U.S. Food and Drug Administration (FDA) also recommends consuming leftover prepared foods within 3-5 days. And be sure your refrigerator temperature is set at 40 degrees or lower.

Myth #7: The best way to thaw frozen foods is to set them out on the kitchen counter.

Fact: You should never defrost food at room temperature. This is because the portions that thaw first then are vulnerable to bacteria growth—and as the FDA tells us, bacteria in room temperature food can double every 20 minutes. Instead, thaw food in the refrigerator, in cold water, or in the microwave using the “defrost” setting.

Fact: Not to get too technical about it, but microwave energy itself doesn’t kill germs—it is the heat generated by the waves that destroy harmful organisms, the same as with a conventional oven. Remember also that microwave ovens may heat foods unevenly, so it’s important to stir foods once or more during the heating process. Turning the container several times during cooking (or using a carousel) helps heat reach all parts of the food.

Myth #9: All foods, if properly prepared, are safe for older adults.

Your healthcare provider can give you more information about the foods that are safe for you.

Myth #10: Restaurant and takeout food are always safe, because restaurants are inspected by the Health Department.

Fact: Though occasional outbreaks of illness are traced back to pathogens in restaurant or deli food, most eating establishments in the U.S. follow proper food handling procedures. But remember: take-out food or “doggie bag” safety is mostly up to you! Eating only until you are full and bringing leftovers home for a later meal is a great idea—for your waistline and your wallet. But only consume leftover food if you can refrigerate it promptly (within two hours, earlier in warm weather).

The FoodSafety.gov website, sponsored by a group of U.S. and state government food safety departments, includes consumer advice and other resources, including information for older adults.